Our previous design, the ET-AL01 Analog LED controller, was designed to control the regular “Analog” (RGB) LED strips. These strips are easy in use, but due to the way they work, the whole strip will emit the same color.

There are RGB LED strips available which have RGB LEDs installed which can be addressed individually, the so-called “Neopixel” strips. These strips are based on LEDs which use a WS2812 or compatible interface chip, which allow each LED to have a different setting / color. There are even addressable RGBW and WW/CW addressable LED strips available. More on that later.

The LED strips are normally based on a WS2812 or compatible controller chip. A table showing the electrical characteristics is below:

Since the ESP8266 or ESP32 controllers are using 3.3V as IO voltage, which is not sufficient as per the datasheet to reliably generate logic “1” voltages, some sort of interfacing needs to be created.

As indicated above, there needs to be a reliable way to generate the correct voltage levels to drive the LED controller chip. In our previous design we had a similar issue, not to drive a chip, but to drive the MOSFETs at a higher voltage. We can use exactly the same solution, the 74HCT244 chip, for this Digital LED Controller. For a complete explanation why this chip is suitable, please read the section in the ET-AL01 blogpost. 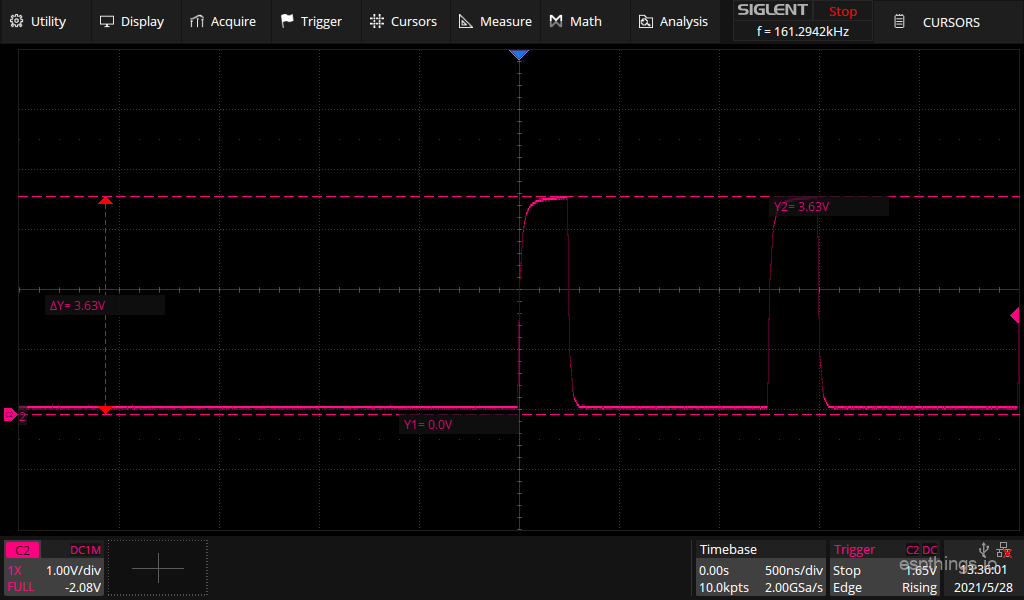 This is the output from the 74HCT244 to the LED strip: 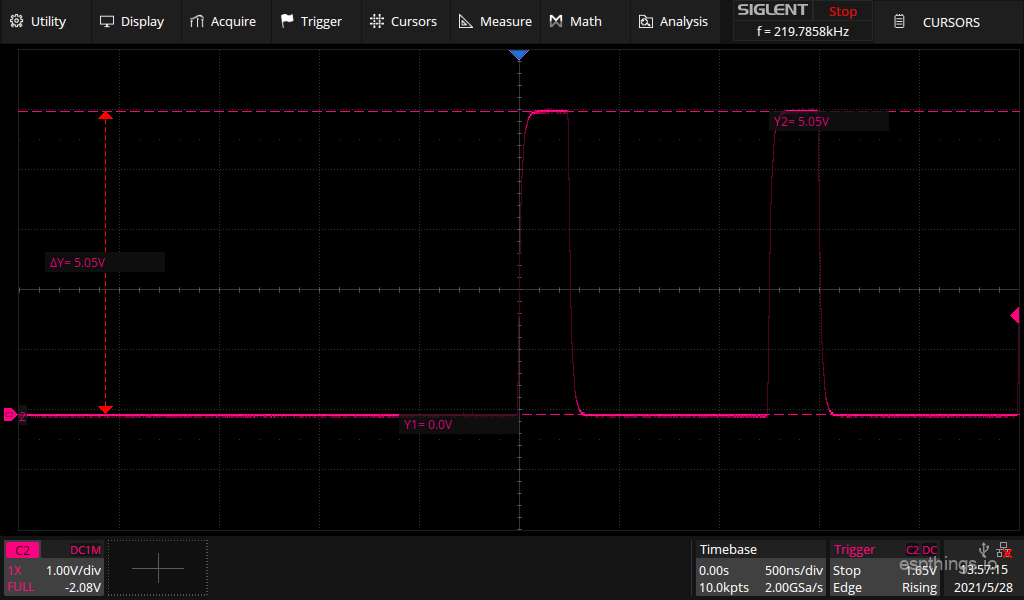 Output frequency: (Measured with one channel in use, running the “Rainbow mega fast” effect.) 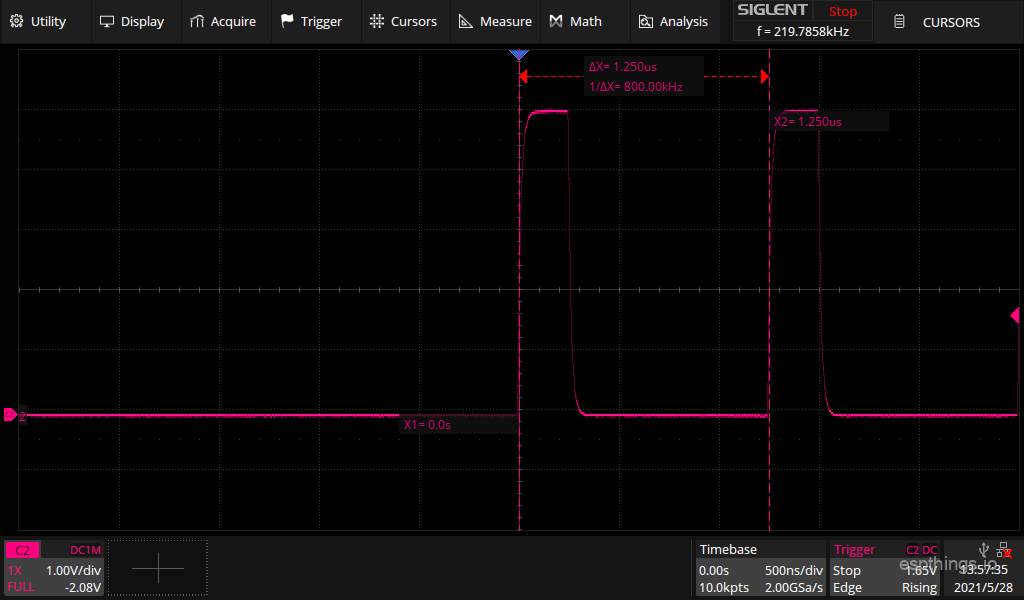 As you can see the pulses are sent out with a frequency of 800kHz.

The LED strips come in several different power supply versions. The most common supply voltage is 12V, but 24V strips and 5V strips are also available. To be able to feed the ET-DL01 controller from the same power supply as the strips it is driving, the design has incorporated a voltage regulator which allows input voltages of 8 – 24V. If 5V strips are being used, the voltage regulator needs to be bypassed, for which a simple solution has been created. At all times, the IO voltage to the LED strips will be 5V!

The controller has 2 inputs for switches or sensors. To activate the inputs, a voltage of 3.3V or 5V needs to be applied. For this reason a 5V connection is made available on the terminal strip, which can be used to power sensors etc. Both inputs are isolated from the controllers by an optocoupler. The optocoupler protects the inputs of the ESP module against damaging voltages, which can be picked up by long wiring to the input switches or (faulty) sensors. 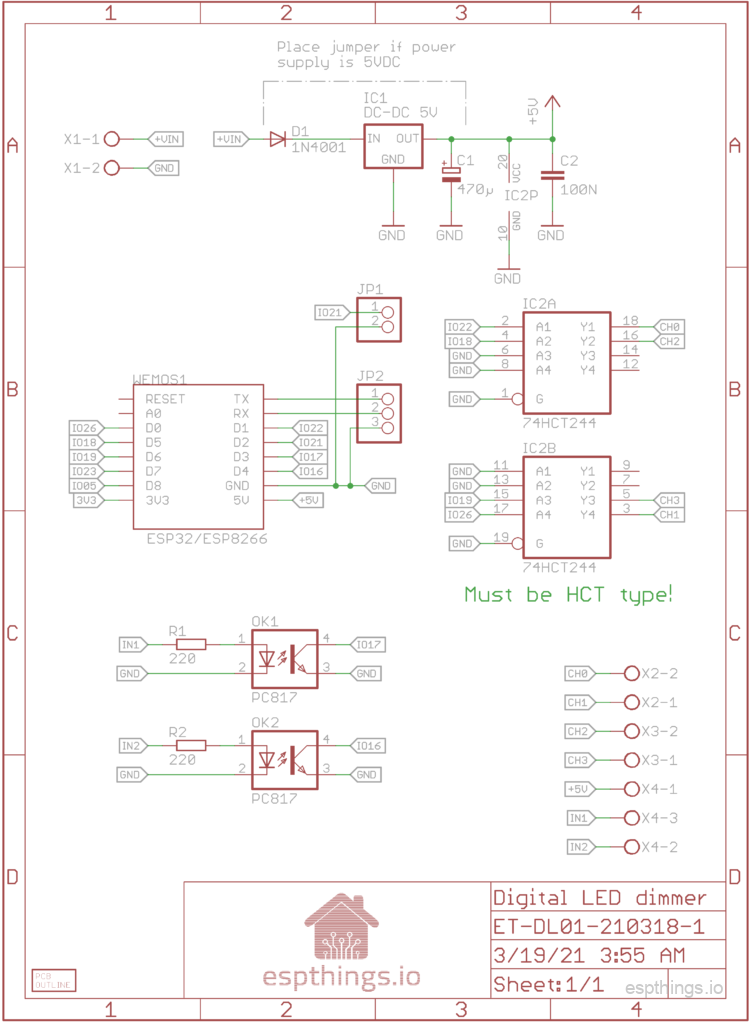 See below the list with the components you will need to build the DL01 controller. A number of these items will not be sold in smaller quantities at AliExpress. We will try to use the same components as much as possible in future projects.

We would really appreciate it if you will use the links below to buy the components, since it will give a little bit of commission to us without any additional cost for yourself. These commissions will be used to cover some of the costs involved in the development of the design.

* You only require one of the modules!

Once all components are soldered in place, perform a good visual check of all joints, and pay particular attention to possible solder bridges (unwanted solder connections between pins). Do not forget to clean the excess solder flux from the PCB using alcohol!

Under normal circumstances the DL01 will be fed by the same power supply as the LED strip. Since the LED strip can draw a significant amount of current, it is advisable to connect the DL01 in the following manner: (We use a 12V power supply and 12V strip as an example)

As you can see, a separate negative (GND) wire runs from the DL01 module to the negative of the power supply. The positive connection can be “shared” with the strip, since the module contains a regulator which will filter out the voltage dips and spikes due to the change of current to the LED strip.

For the power wiring, do not use very small wires, since this will create issues with the higher currents to the LED strip. For the data connection you can use small wire, since there is a very small current flowing through the wire.

In case you would like to connect a sensor or switch to the DL01, you can do this as per below example. We show here the connection to a PIR motion detector. The PIR module runs at 5V, which is available on the terminal strip:

Since the currents are small, you can use small wire for this. The inputs are 5V tolerant, so there is no worry about blowing up the module.

During the construction of the prototype, and the measuring of the signal waveforms afterwards, we found out that a bad batch of the 74HCT244 were delivered. The output voltage never reached the expected 5.0V, but did not go over 3.6V. The LED strip did work with this signal though, but if this 74HCT244 batch would have been used for the AL01 analog dimmer, the MOSFETs on that module would not be driven correctly, resulting in a lower light output. We did a test, and instead of the expected 12V output, only 7V output was achieved on the AL01 dimmer.

We use cookies on our website to give you the most relevant experience by remembering your preferences and repeat visits and to analyse usage. By clicking “Accept”, you consent to the use of ALL the cookies.
Cookie settingsACCEPT
Manage consent

This website uses cookies to improve your experience while you navigate through the website. Out of these, the cookies that are categorized as necessary are stored on your browser as they are essential for the working of basic functionalities of the website. We also use third-party cookies that help us analyze and understand how you use this website. These cookies will be stored in your browser only with your consent. You also have the option to opt-out of these cookies. But opting out of some of these cookies may affect your browsing experience.
Necessary Always Enabled
Necessary cookies are absolutely essential for the website to function properly. This category only includes cookies that ensures basic functionalities and security features of the website. These cookies do not store any personal information.
Non-necessary
Any cookies that may not be particularly necessary for the website to function and is used specifically to collect user personal data via analytics, ads, other embedded contents are termed as non-necessary cookies. It is mandatory to procure user consent prior to running these cookies on your website.
SAVE & ACCEPT
Translate »